My tig ol' biddies ran The Brooklyn Half Marathon.

I like to run marathons. Not full ones, I'm not that African. Wish I was. In fact, I do more of a light jog instead of run, cause we these tits, I've gotta keep it calm & aerodynamic. The way people feel about running is about the same about cilantro. They're either into it or not, I get it. I like to jog because I feel like it clears my brain, and let's face it, if I didn't exercise I'd be the size of Precious. Yes honey, I'm maintaining chunky, thank you very much.

The Brooklyn Half Marathon was my fourth half in four years. I'm not bragging, at all - I'm just documenting. I can't even remember what I wore yesterday, so this is what I know.. 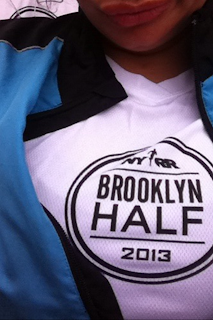 My first half was in Vegas in December. It's was huh-mazing.  My friend just had a kid, turned 35, & was all, I need to do something different. We took our national geographic titties to Vegas & lightly jogged for 2 hours and 45 minutes. Drag queens were walking faster then us in video ho heels, but we didn't care. We were doin' it. The Rock n' Roll peeps host great races because there's a band every 3 miles playing Journey & Bon Jovi tunes. I'm sorry, I had to stop believing by mile 11. There were also running Elvis', couples who have just gotten married, prostitutes, and white tigers in cages. It was like a marathon on acid. Yes, please.

I had such a great time, I was inspired to run another half marathon 2 months later, in Miami, FL.
Um, wow. That's the last time I act on my inspiration. Although it was beautiful running over tiny bridges by the ocean air, I've never seen so many fake tits in one place. It was like everyone was running in the same place. I wouldn't run Miami again because it just got too hot towards the end. The sun came out, and I got super dehydrated, I saw pics of myself and I looked like Tom Hanks in Castaway with back fat. It was just too damn much.

About a year and a half later, while living in Los Angeles, I got the itch again & ran another half marathon with a friend in downtown Los Angeles. That was probably the most low budget marathon ever. We ran the same street and just looped it. I could barley breath because of the smog. There were hardly any people out except for the homeless people who were cheering us with signs and empty cups for change. Yeah, too bad I can't get my money back for that shit.

So, what I lurved about the Brooklyn Half, was the community. I heard different languages the whole time, lightly jogged through neighborhoods I'd never been to, and finished on Coney Island crossing the finish line with my hands in the air, a tear on my face, and proper titty sweat on my shirt like some sort of legit athlete. Then I got bussed to the end of the pier by 4 angry black dudes, cause, hello - it is New York, after all...

If you're thinking about getting into running - here are some tips - DON'T. JK!

Let me know how it goes!


Posted by Miss Michelle Buteau at 8:05 AM